Karpri is one of Israel’s largest refrigeration and cooling warehouses (freezing works facilities). It was founded in 1963 and is part of a “Tnuva dairy” concern (a billion+ dollar company).

With 30,000 m³ (more than a million cubic feet) of cooling rooms spreading over 22 square kilometers (5.5 acres), Karpri supplies various-temperature refrigeration services to many concerns, such as Coca‑Cola and Nestle. Karpri holds three separate machine rooms for comprehensive cooling supply circulation, all monitored and maintained by an experienced staff of mechanics and electrical engineers.

Since 2002 Karpri had been experiencing weekly unexplained power events which seemed to occur with no regard to a specific source or trigger. Karpri had spent tens of thousands of dollars and months of man hours trying to identify the source of interruption which caused them a repetitive failure in their equipment and accumulated damage in hundreds of thousands of dollars.

The problem had been addressed to the local Israeli Electric Company (IEC) as well as to many consulting companies over a long period of time. The most sophisticated power quality analyzers in the market today from four different manufacturers were installed on site for long periods, but none were successful in determining the source of the repetitive failures.

After Elspec PQZIP compression technology was launched, Karpri was finally able to install power quality analyzers that accurately identified the source of the failures.

Four Elspec G4420 Power Quality Analyzers were installed at the main service, at the secondary of each transformer and at one of the MCC with
many reported failures (hereinafternamed 1, 2, 3 and 4 as showed at Figure 2). Each device utilized the patented PQZIP compression technology, providing typical 1000:1 compress ratio, to record on-board all the data at 512 samples per cycle for a few months.

All the devices were connected to the local network, and using a unique time synchronization algorithm, they synchronized their time over the LAN between themselves. All data was synchronized by typical maximum of ±1 sample. In this way, it was possible to monitor all the information from different locations on the same graph and at the same time.

All the devices were then connected to Elspec’s central PQSCADA servers via the Internet, allowing Karpri to outsource all its power quality management – measurement devices, collecting data, data storage and power quality analysis.

Within just a few days after the instruments implementation was completed, not only was the main source of power events located, but the full scope and progress of the power events was revealed.

Figure 2 shows the results of EN 50160 compliance at the main service (1). Similar results were measured at each one of the transformer secondary (2 & 3). The site not only complies with the standard, it is even exceeds it.

Figure 3 shows the EN 50160 results at the MCC (4), where many faults were observed. However, similar faults occur in points 2 and 3 as well, which perfectly comply with EN 50160. The obvious conclusion is that compliance to EN50160 cannot provide the answer to the source of failures, although it indicates existence of voltage dips in one location. 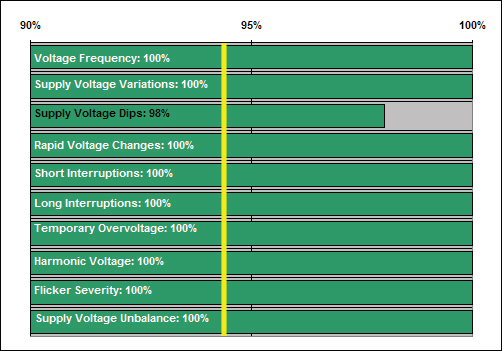 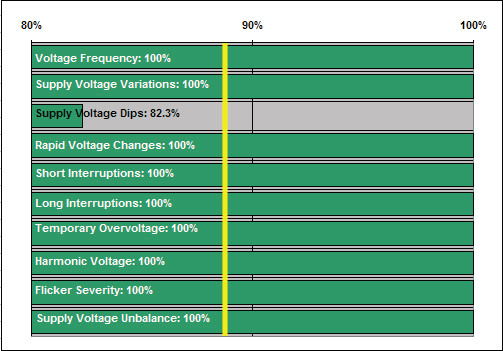 One of the main benefits of using PQZIP compression technology and continuous waveform recording is the ability to monitor events at several locations
synchronized by time. Figure 4 shows the phase L2 to neutral voltage at all 4 locations. Only the voltage dip at 4 was more than the commonly used 10% threshold. When using a trigger-based logger, the troubleshooting engineer would have only a few cycles before and a few cycles after the event, from location 4 only. The data from the other three locations wouldn’t be logged. Therefore, it would be difficult to understand the event propagation over the network.

Figure 4 shows the L2 voltage on all locations. It shows two events – on the left side an event started from 4, to the transformer secondary (3), up to the primary (1) and down to the other’s transformer secondary (2). However, the event on the right did the opposite: from 2 to 1 and down to 3 and 4. The lack of additional
measurement points prevents better analysis of the source of failure and how to prevent it from reoccurring.

Figure 5 zooms in on the first event, showing the event propagation by time, in addition to the levels analysis done above.

Figure 7 shows the voltages, currents, kW, kVAr and kVA trends of a typical dip at the MCC (4) which allows for deeper investigation. It clearly shows that the dip is caused by a motor startup, and it can easily be compensated for by using the Elspec Equalizer – the world’s fastest reactive power compensation system. However, since these dips occur every few minutes, it is not likely the source of the repetitive failures. Moreover, similar failures occur at locations where the dips are significantly smaller. 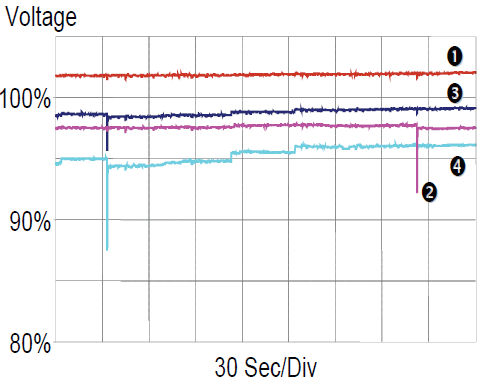 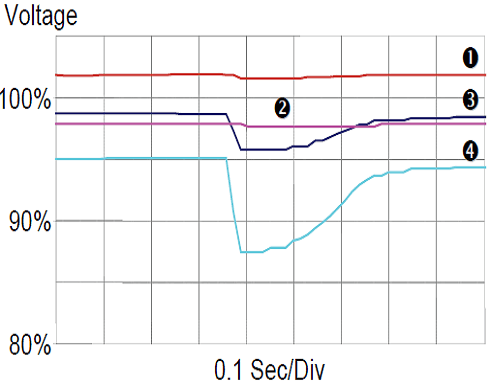 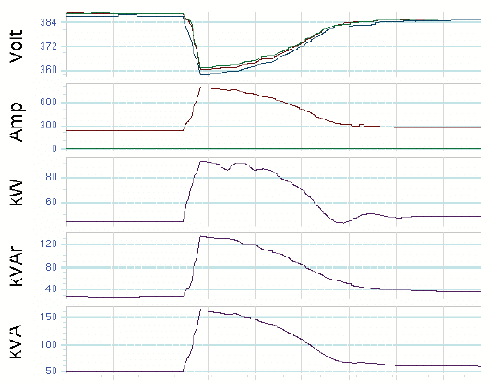 The site is connected using two Delta/Wye transformers. Since the voltage supply is Delta, the measurements are commonly limited to line-to-line voltages only. This is also what is required in the different standards and regulations. Elspec G4400 analyzers record all the information all the time, including line‑to‑neutral values. When the network is Delta, and the neutral is not connected, the line-to-neutral values are the line-to-ground ones. One of the benefits of the additional
measurements is shown in Figure 7. Due to a short circuit between phase L3 to the ground, the line-to-ground voltages spiked to 26kV, rather than the nominal 12.7kV (changes from 0% to 205%). During the same failure, the dip on the line‑to‑line voltage was less than 1% from nominal and 3% from the steady state level (21.8kV with respect to 22.0kV and 22.4kV).

The technical justification for monitoring only the line-to-line voltages is that the line-to-ground voltages do not go through the transformer since it is D/Y. However, the over-and-under voltages do affect the transformer itself and reduce its life expectancy. Moreover, in sites where there are medium voltage (MV) loads, this voltage can cause significant damage to the loads as well.

The site includes many generators of harmonic pollution, mainly the 5th harmonic. The loads generate harmonic current which create voltage pollution. Figure 8 shows a typical condition – maximum 3.3% THD V, maximum 20% THD I, 6.5V and 140A at 5th harmony. Normally, measurements are performed in accordance to IEC 61000-4-30. This standard requires an averaging of all parameters over a 200 ms period (10 cycles at 50Hz or 12 cycles at 60Hz). However, this averaging may hide shorter phenomena. In some cases, short events don’t have the required energy to cause damage. However, it depends on the weakness of the most sensitive device. Figure 10 shows the different results of the voltage and current THD when calculating every cycle (red) and according to IEC 61000‑4-30 (green). Rather than maximum current THD of 19%, the true value is 53%. Similarly, the voltage THD is 12% and not 4%.

Why is it Important?

Due do superposition, the network is represented at the 5th harmonic differently than in the fundamental (Figure 10). The load functions as current source (IH). Normally, the network equivalent impedance (Zs = ZSOURCE = utility network plus transformer) is the lowest, and the harmonic current flows to the utility
network which can withstand pollution. However, in some cases the network impedance is increased (e.g., connection or disconnection of capacitors) and the harmonic current flows to the lowest impedance, which is a sensitive load. In addition, due to the increased impedance, the current source cannot supply the same amount of current, and during this resonance the current is smaller.

Normally, harmonics are averaged because the importance is the total energy in the harmonics. In this case, the peak power of this resonance is 3kVA (Figure 11). Obviously, the 200 ms average is less, but it was still enough to cause damage. Moreover, sensitive loads probably fail before the 200 ms period is over.

To prevent the resonance, a passive filter should be used. The filter should have low impedance at the 5th harmony and be installed as close as possible to the transformer. Therefore, when a situation as described above happens, the lowest impedance is the passive filter which can withstand the harmonic current,
and the sensitive loads will not be affected. It is not possible to install controlled filters (passive or active) because the fastest ones have at least one cycle reaction time. Karpri installed two Elspec fixed, passive filters tuned to the 5th harmony (tuned to 235 Hz). After the installation of the filters, no additional failures were reported. Moreover, some of the loads that were disconnected when not in use in order to protect them, were left connected continuously.

In his letter to the customer (ref. 900‑031 from 5-11-06), the consultant engineer said, “The power quality analysis system, installed at the plant by Elspec Ltd. was successful in locating anomalies which the local utility (Israeli Electric Company – IEC) could not locate the entire time their instruments were installed at the site. Furthermore, according to the provided graphs, it can be clearly observed that the rising in harmonics THD capacity occurred simultaneously with temporary external changes in the IEC 22KV network which indicates that there is an existing correlation between the two phenomena. We shall send a copy of the graphs to IEC for extensive explanations about these repeated simultaneous phenomena which occur at a few hours pattern. In accordance to the measurement results so far, we are advising to keep operating Elspec’s analysis systems. The requested payment seems reasonable.”

In addition, Mr. David Lustiger, Karpri’s CEO, said, “So many engineers, such a long time and so much money spent without a successful identification of the cause for the failures… Elspec’s solution proved to be the most comprehensive yet easy to implement and most importantly – the only one that worked !”

Standards were created to provide an equal starting point to the power quality analysis and to help meters show the same values. However, in many cases limiting the information to standards prevented the troubleshooting engineer from monitoring the anomalies, not to mention identifying their source. The Elspec BlackBox series, equipped with PQZip compression technology, provides continuous measurement of available information in a 1,024 sample/cycle. There is no limit on the
available data, since no thresholds or setups are used. In addition, it measures both in accordance to IEC 61000-4-30 and cycle-by-cycle in order to guarantee a complete view of the electrical network. Using the Elspec G4400 for power quality analysis assures that anomalies not only be monitored, but their causes also be identified.

Scroll back to top